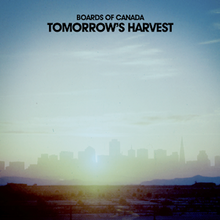 Boards of Canada are so highly regarded that they could do almost anything and their legions of fans would still find a way of regarding them as masterful. Me? I like their earlier albums, but I think all the build-up surrounding this release was horseshit dressed as a puzzle box. All the clever marketing of albums in the Spotify age serves to build expectation regardless of whether the music is any fucking good, especially because the music is unlikely to live up to the hype. I suppose that's the point – pique the interest, create some mystique and the pre-orders come rolling in.

Boards of Canada cultivate this mystique to a frustrating degree. It's one thing for an artist to invite multi-faceted interpretations of their work; it's another thing entirely to create art that actually encourages deeper engagement. Such is the problem I have with Tomorrow's Harvest. While their revealing interview with The Guardian hinted at plenty of depths to explore and ponder over, Tomorrow's Harvest falls short of the mark by simply being too long and fragmented, and by including a handful of bland BoC staples that dilute what could otherwise have been a delirious and unsettling brew.

My initial expectations were low after The Campfire Headphase, but my anticipation of this release heightened with the video for 'Reach For The Dead'. I hadn't heard the track prior to seeing the video, and experiencing the music for the first time as Neil Krug's stunning video unfolded before me was revelatory. Since then I haven't been able to hear the song without imagining the visuals.

There's nothing here that comes close to equaling 'Reach For The Dead's majestic slow-burn, although the first five tracks, which include the single, do a decent job of setting the scene. After the album's longest track, the unique, disorientating 'Jacquard Causeway', and the brief, sinister 'Telepath', 'Cold Earth' feels almost comically dated, in that it sounds like it could have happily appeared on an earlier BoC album. It's a nice-enough tune in itself, but totally disrupts the eerie atmosphere that the first five tracks generate.

And that's it – I'm immediately disinterested, the spell is broken, the promise squandered. What were they thinking? Why is this track here? It's also perplexing to learn that they sourced a particularly hard-to-find effects unit in order to create one second of audio for this track. Considering how meticulous the Sandison brothers are in everything they do, I don't understand some of their aesthetic choices here, which is frustrating. For a while I kept listening to try and work out why. But now I just don't care.
Posted by Tim Clarke at 19:29