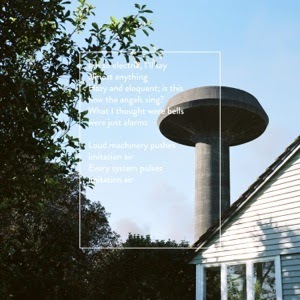 When I shared The Caribbean's last album Discontinued Perfume with my best friend and bandmate Jono, his initial response was similar to mine – the music's too busy, there are too many words, frontman Michael Kentoff has a nasal vocal tone akin to Yo La Tengo's Ira Kaplan on a caffeine buzz. It's hard to find a way in. Jono persisted, thanks in part to the appearance of the wonderful 'Mr Let's Find Out' on a mix CD I gave him, plus my continued insistence on the band's idiosyncratic brilliance. Given time, he had to admit The Caribbean have a certain something, a unique magic that I attempted to put my finger on in a write-up about my favourite albums of 2011.

On their new album, The Caribbean are more immediately persuasive. Although their attention to detail makes repeat listens a necessity, both to appreciate the smooth songwriting and to luxuriate in the wonderful production, Moon Sickness feels more vivid than Discontinued Perfume. Most notably, first single and album standout 'Imitation Air' juxtaposes guitar parts so sonically differentiated that the effect is deeply psychedelic – a warbling, chewed-tape guitar in the left channel, a clean phased guitar in the right – especially when the vocals, bass and drums sit soberly between them, carrying the song forward with a crisp clip. It's my favourite Caribbean song to date, perhaps for the band too – after all, that's a snippet of the song's lyrics on the album's front cover.

Second single 'Jobsworth', premiered late last year on rollingstone.com no less, is almost as appealing, with its chiming guitar refrain, shuffling drums, and some of Kentoff's most resonant lyrics to date:

American Jobsworth
Sends us out to scan the city
We've got nearly zero asshole factor here
No real shouters
In fact, everyone speaks quietly
And smiles your soul to sleep.


'Electric Bass' has a propulsive groove and the cheeky line "Cue electric bass!" prompts that goosebumpy feeling when a song's bassline kicks in and the energy level jumps. Except it's a feint. Nothing changes for a few bars – very funny, fellas – then some delicious instrumental colours begin to expand the song's horizons, tingling the extremeties. The guitar licks on this one are hot shit, too. Similarly tasty fretwork crops up later on 'Echopraxia', the song title potentially pointing to another sly Caribbean "joke". Are those guitar licks aping the earlier song? Or another band? Or both? Whichever way you cut it, it's smooth without being smarmy. A suburban Steely Dan.

Given Kentoff's fondness for chatty, literate lyrics, with his vocals pretty much guaranteed to start up as soon as the song gets going, the feel of The Caribbean's verses can get a bit samey, but just as you start to wonder whether you should skip a trick, something changes – beautiful instrumental details will pop up or drop out, a fresh chord sequence will evolve. They judge exactly when to make things interesting again to persuade the listener from tuning out, whether between songs or within songs, maximising the impact of each twist and turn. And on the title track, the band muster a rare extended instrumental coda for some much-needed breathing space. Smart songwriting.

I love how succinct The Caribbean are, and how much they cram into these 35 minutes. I love how I feel when I listen to their smart, deftly executed songs. Moon Sickness is a beauty, and probably their best album yet. If you need further convincing, producer Chad Clark's overview at the Hometapes website should do the trick.
Posted by Tim Clarke at 18:27