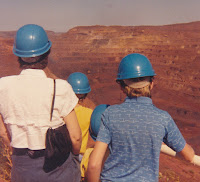 I won't pretend to have a particularly firm handle on what's going on in Australian politics these days, but one thing's for sure: most of what Tony Abbott and the Liberals have done to Australia since being voted in has been an utter fucking joke. (If there was ever a question of whether Abbott is snugly nestled in the pocket of the devil, there's a handy blog detailing the extensive damage Abbott has inflicted upon this country.)

Perth-based duo Mining Tax – Alex Griffin (Ermine Coat) and Mitchell Henderson-Miller – cut straight to the chase with the title of their debut EP Degenerational Report. While Mining Tax seem, on the surface, to be yet another '80s-aping outfit, more style than substance, the opposite is in fact the case: this is minimal synth-pop of a warm, incisive and intelligent stripe. Griffin's impassioned and occasionally very witty vocals are smothered by Henderson-Miller's fuzzy synths, evoking the muffled voices of the thousands of frustrated Australians who can't wait to kick Abbott out of the PM's chair next year.

Popping this 20-minute beauty on gives me the same thrill as I got at school when the teacher would wheel out the TV and VHS player on a trolley so we could watch a documentary in class.

Degenerational Report is out now on Workplace Safety CD-Rs.
Posted by Tim Clarke at 23:23