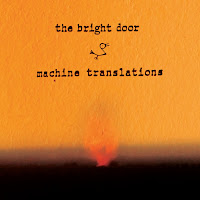 I've lived in Melbourne for ten years now, and during that time Machine Translations have been perpetually on the periphery of my musical radar. Only now, with album number eight, have I finally investigated J. Walker's music – and I'm gently blown away.

The Bright Door reminds me of lonely days as a teenager back in England. I would listlessly wander the disused railway tracks near Steeple Claydon in Buckinghamshire listening to my favourite C90 on headphones: Nirvana's In Utero on one side, Sparklehorse's Vivadixiesubmarinetransmissionplot on the other. Angry. Sad. Beautiful. Alternately downtrodden in the dirt and breathing fire against the sky. Those two albums have stayed with me, and it's the latter I'm reminded of most strongly as I listen to The Bright Door.

Much like the wonderful music of the sadly departed Mark Linkous, there's simplicity in these songs, which accounts for their immediacy, but also subtle depth that reveals itself on repeat listens. The instruments are beautifully recorded; each part resonates and blooms. It's woody and airy, it sounds like musicians in a room, but it's not earnest or striving for 'authenticity'. There's a bracingly off-key Sonic Youth-meets-gamelan quality to some of the instrumental parts, whether played on electric guitar or what sounds like a hammered dulcimer (or could equally be someone abusing the innards of a piano). The core of each of the songs is acoustic guitar and voice, but it's the way J. builds the momentum and weight of the arrangements that keeps me coming back. Bruised autumnal colours glow and recede. Light and shade. Breathe in, breathe out.

'Perfect Crime' glowers with the threat of violence, distorted guitars brewing like rainclouds. Single 'Broken Arrows' employs the eerie textures of gamelan gongs and chimes to weave its spell before a cantering drum pattern carries the song into more conventional territory. A song like 'Needles', with its hesitant beginning, has me on tenterhooks as I know what a wonderful crescendo it builds into. I get goosebumps anticipating the drum and accordion drop-in, the way the song sways and sighs, the ache of violins. Arrangements and dynamics are majestically handled throughout.

J.'s voice, as limited as it may be, hits the spot for me. It feels intimate and slightly gritty. None of his lyrics stand out, which means they become part of the emotional fabric of the songs rather than symbols stitched on top. After seven albums of this stuff, J. knows what he's doing and he doesn't rush things.

My only complaint about this album is the two minutes of silence at the start of final track 'The Bright Door', which upsets the flow somewhat – but that's a minor issue. (At least it's not one of those irritating 'hidden tracks' tucked away after fifteen minutes of silence that you have to skip through.) I haven't felt so strongly about an album for months. Time to dig back through the Machine Translations discography to see what I've been missing.
Posted by Tim Clarke at 20:53