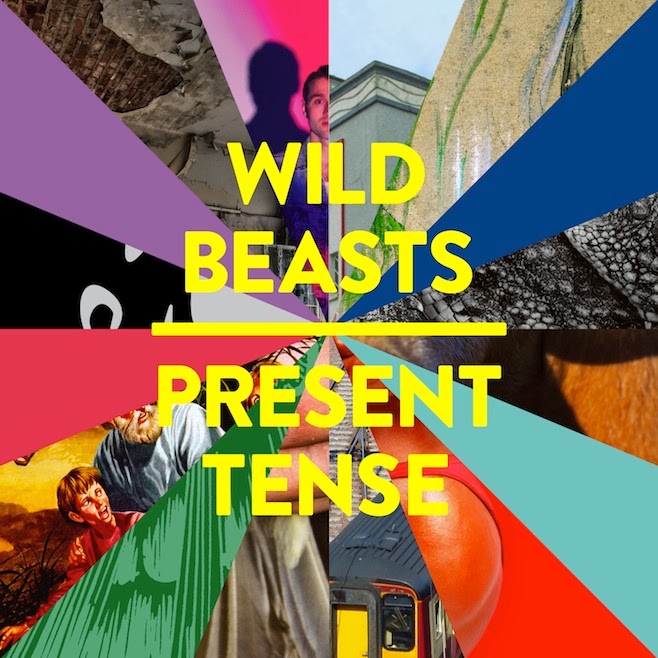 In this era of over-stimulation and perpetually prodded hand-held devices, less is more. Or is it? If recent interviews are anything to go by, Wild Beasts have rethought their working methods upon relocating to London, taking the time away from touring to explore alternative sounds and rebuild their songwriting from the ground up. They sound confident they've arrived at a workable new direction. However, while their new palette of sounds may have enlivened their creative process, assuaging their fear of repeating themselves or becoming irrelevant, there's something strangely unsatisfying about Present Tense. They sound like they're second-guessing themselves, as if in stripping back their instrumentation they lean too heavily on the emotive powers of Tom Fleming and Hayden Thorpe's beautiful voices (which have strangely become more similar and less singular over time), plus their new studio toys (including a Dave Smith Instruments Prophet synth). For better or worse, they've upended the delicate balance they achieved on Smother.

One thing that's immediately apparent to anyone with a passing familiarity with their previous albums is just how different Present Tense sounds, right from the off. I'm fairly certain that if I heard this album without having loved Wild Beasts' previous records I would discount it as fluffy synth-pop and move right along. Indeed, if I was trying to persuade someone of Wild Beasts' singular brilliance, I certainly wouldn't start here. Not that this is a bad album by any means, but this latest iteration of their evolving sound is probably the least immediately gratifying, the slowest to reveal its charms. And those charms pale pretty fast.

My first listen to Present Tense was massively disappointing. Admittedly, singles 'Wanderlust' and 'Sweet Spot' took a while to win me over, suggesting that the album would follow suit, but the only song that stood out on early listens was penultimate track 'A New Life', which felt like it should be the closer, with its spine-tingling atmosphere of deflation. With each listen, different tracks rose to the fore. Aside from 'A New Life', I was initially drawn to the other songs featuring Tom Fleming on lead vocals ('Nature Boy', 'Daughters' and 'A Dog's Life') because they seemed to have a degree of ambiguity and depth. The tracks that have taken the longest to reveal their charms ('Mecca', 'Simple Beautiful Truth' and 'Palace') stray furthest from the Wild Beasts sound I've come to know and love, with superficially pretty synth lines and the simplest of melodic gestures.

Present Tense may prove to be a transitional record in Wild Beasts' discography. It's not without its merits (the production is flawless, as ever), but it leaves me frustrated – especially given how much I've been looking forward to enjoying it, which counts for a lot when the bombardment of new releases is so relentless. They're walking a fine line here. On the one hand, the music could be praised as diaphonous, equine, poised; on the other, it could be damned as flimsy, trendy, insubstantial. I appreciate the way these delicate, crystalline compositions glisten as I hold them up to the light, but I worry they won't bear close inspection for much longer.
Posted by Tim Clarke at 17:09