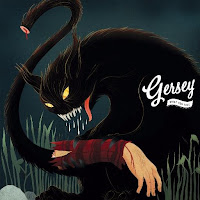 For about a year, before Gersey vocalist/bassist Craig Jackson and his wife Camilla left Melbourne for L.A., I was lucky enough to play guitar in their band, The Sirens of Venice. Craig and Milli started writing songs together after Gersey guitarist Matt Davis moved to Paris, where he formed the instrumental band Bombazine Black, and things wound down for Gersey. Or so it seemed. Despite the friction of distance, the band reconvened for What You Kill, their fourth album since forming all the way back in 1997.

Before Craig left for L.A., Gersey (minus Matt) recorded 14 songs in Melbourne over the course of two weeks, with 12 making the final cut. The fact that the bulk of the album was completed quite quickly comes across in the easy, flowing nature of the performances, no doubt a product of the long-standing chemistry within the band. In Gersey’s soundworld, simplicity is a virtue, with chord changes and melodies unfolding naturally, unhurried. There's a sense of melancholic drift tempered by resilience, Craig's lyrics and vocal performances keeping things ambiguous, coloured equally with sadness and happiness. When they hit their straps, they're like the best bits of mid-tempo Mogwai with vocals – which is a very good thing.


For me, the highpoints of the album come when the band stretch out across six or seven minutes, such as on 'When You Hollow Out', 'Endlessness', and ‘She Knows’, a swooningly gorgeous waltz. On the more concise end of the songwriting spectrum are 'See Lucienne', and ‘Summer Days’, which evokes that mid-afternoon music festival grogginess, where you realise you’re happy and drunk, but dead on your feet with hours of bands left to watch – you can practically see the sun glinting off Jackson’s sunglasses.

The countless hours spent in rehearsal rooms and on stages across Australia, plus the new-found distance between members, could have resulted in an album that sounds tired and needless. Though the album stretches out across nearly an hour – so perhaps losing a couple of the less engaging cuts may have enlivened the whole – there's little here that doesn't sound vital and woozily ethereal. Like the gruesome monster on the cover, about to sink its teeth into a severed arm, Gersey still sound hungry.
Posted by Tim Clarke at 00:24