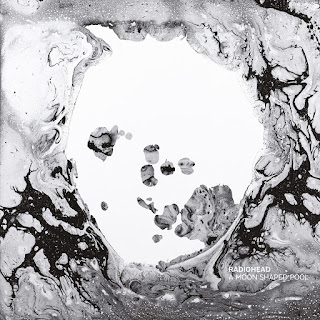 Five years may be a long time to wait between albums, but for Radiohead to follow up their underrated eighth album The King of Limbs with A Moon Shaped Pool still feels miraculous. After the carefully planned teaser campaign – the flyers sent via snail mail, the whiteout of their social media accounts, the superb videos for advance singles 'Burn the Witch' and 'Daydreaming' – Radiohead's ninth album is deeply beguiling and occasionally overwhelming.

The first surprise was the alphabetical tracklisting. A lucky accident or reverse engineering? Nothing with this band feels accidental, so I'd guess the latter. The second surprise was the generous running time of 53 minutes. Who the hell releases an album longer than 4o minutes at this time of fast-click attention deficit? Thankfully, A Moon Shaped Pool is more than worthy of focused, album-length listening; indeed, it feels neglectful to begin playing this album unless I can give it my full attention.

My first impression was how well it works as a whole. The feeling it left me with was similar to my first listen of Portishead's cinematic Dummy – I felt like I'd experienced a profound and painstakingly crafted work of art, undoubtedly beautiful but emotionally heavy. Comparing this album to Radiohead's previous work, what's most immediately apparent is how different it sounds to not only its predecessor, but also their most widely revered releases, OK Computer and Kid A. There's plenty of piano, strings and choral voices, and not much in the way of effected guitars or fretboard histrionics. Even Thom's vocal performances are, on the whole, pretty restrained. Its closest cousin in their discography is probably In Rainbows, my personal favourite.

In terms of structure, the album feels 'circular', echoing the cover art, with the music radiating out from the centre in concentric waves. 'Glass Eyes' is the gorgeous, glistening sphere around which the rest of the album orbits. Among heavily filtered piano and a subtle, aching string arrangement, the lyrics tell a simple tale of arriving at a destination via train only to feel alienated – so the protagonist takes a walk out into nature to regroup.

Either side of the centre are two of the album's most upbeat, electric numbers, both of which were performed live during the band's 2012 tour. 'Ful Stop' reins in some of the hurtling urgency of its live incarnation, especially in the first half, but still manages to seethe and throb with almost sickening malevolence before erupting into a head-nodding krautrock groove. 'Identikit' has evolved notably in the studio since being played live, and wasn't immediately convincing on early listens; the dubby treatments, choir and itchy guitar solo all felt a bit 'remixed'. Thankfully, repeat listens have revealed the song's dynamism and winning melodies.

Step out from the centre again to find the pretty, open-tuned folk of 'Desert Island Disk' and 'The Numbers' (previously known as 'Silent Spring'), which Thom Yorke debuted in Paris last December. Then, either side of these songs are two of my favourites. 'Decks Dark' is reminiscent of 'Subterranean Homesick Alien', with some fantastic bass playing from Colin Greenwood and splashes of spring reverb on the rhythm guitars. 'Present Tense', which Thom has been playing solo since 2009, is backed by a shuffling samba rhythm and swaddled in eerie tape echo treatments.


'Daydreaming' is utterly devastating, especially when accompanied by Paul Thomas Anderson's video, which has brought me to tears more than once. While plenty has already been written online about the fact Thom is saying "half my life" at the song's menacing conclusion, I feel it's more likely he's referring to his time within the band than his relationship with the mother of his two children, especially because the song also features the line, "We are just happy to serve you". Penultimate track 'Tinker Tailor Soldier Sailor Rich Man Poor Man Beggar Man Thief' has taken the longest to reveal its charms, but is now sinking in nicely.

Finally, at the album's extremities, where Radiohead often position their most startling songs, we have the two oldest cuts. Addictive single 'Burn the Witch', supposedly dating back to the sessions for Kid A, scythes through the upper registers with its col legno string arrangements and soaring chorus. A long-awaited studio version of 'True Love Waits', debuted live back in 1995 (!), closes out the album on an elegiac note, with a similarly waterlogged piano tone to 'Daydreaming'.

While it's easy to read the personal backstory that will no doubt have coloured the creation of this album – whether Thom's separation or the death of producer Nigel Godrich's father – Radiohead have never been a band to be taken so literally. If anything, some of Thom's lyrics suggest a potential environmental theme, which is also reflected in Stanley Donwood's recently posted artwork, with what looks like an aerial view of a planet flooded, engulfed in flames, swirling with pollution or smothered in vegetation.

Ultimately, like all enduring art, A Moon Shaped Pool is open to interpretation and richly rewards close attention. It's a dark, swirling vortex of glorious songcraft that reflects our hopes, our fears, our vulnerable, aching humanity.

[A Moon Shaped Pool is available digitally now, and on vinyl and CD on 17th June.]
Posted by Tim Clarke at 17:45