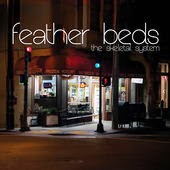 I'd like to think I'm an omnivorous listener, open to many genres and styles, but really, who am I kidding? I'm inexorably tied to the music of the mid to late '90s, when I was in my late teens and early 20s: Yo La Tengo's I Can Hear The Heart Beating As One, The Flaming Lips' Clouds Taste Metallic, Sparklehorse's Vivadixiesubmarinetransmissionplot. I rarely listen to those particular albums any more because they're so familiar, but their enduring appeal lies in the balance between songcraft and soundscaping – there's always a tune to hitch your ear to, plus plenty of interesting stuff going on within and around the songs to explore on repeat listens.

Michael Orange mines the same rich seam, and his debut album as Feather Beds, The Skeletal System, is a short, sweet distillation of this aesthetic. Nothing is played absolutely straight, but nothing is showily odd. The video for 'Animal Fat' visualises this effect nicely:

I know it's a kaleidoscope; you know it's a kaleidoscope. But can you look away? No. It's hypnotic. Understanding something doesn't necessarily make it less alluring. I hear what Orange is doing and it all sounds just right to me. I appreciate the craftsmanship that gently eases the album from more focused, melodic passages into ambient washes of sound. There's a lightness of touch, a gentle flexing of arrangements to make reflections glint off surfaces. A blurring. The pleasure of parallax as you stare out of a train window. Although I could happily zone out to tracks like 'Airbrushed' if they were two or three times as long, the restraint demonstrated on this lovely album keeps me coming back.

The Skeletal System is available as a limited edition CD on Happenin Records and for streaming on Spotify.