Fred Thomas – All Are Saved 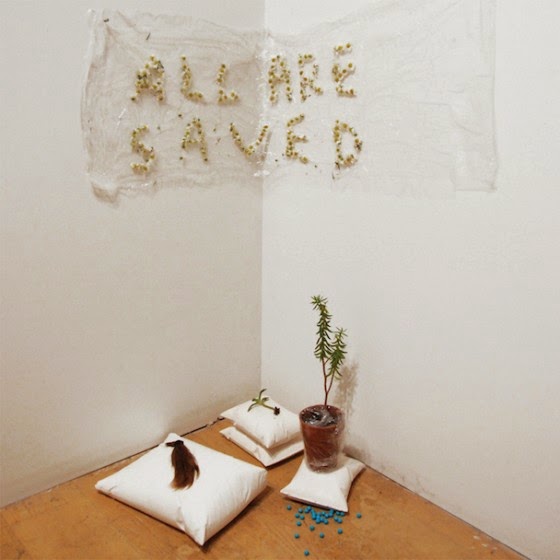 Even though Fred Thomas has released dozens of albums, whether solo or in his band Saturday Looks Good To Me (plus numerous other outfits), I'd not heard any of them before All Are Saved, his latest on Polyvinyl. If any of his previous albums are even half as good as this gorgeous, warped gem, I'll have a long and fruitful time digging back through his discography.

Listening to this album feels like rooting around under the sofa cushions for the remote control, only to find a photo of your beloved departed dog, an unopened bottle of beer, a dusty cassette compilation made by an old friend, a dog-eared journal, and a pack of gum. It's surprising, ridiculous, hilarious, infuriating, brilliant, silly, beautiful, profound, knowingly throwaway and deadly serious. All Are Saved is truly an unexpected delight.

It starts and ends with songs about dogs, littered with tape hiss, cymbal crashes and tape echo. The lyrics – some of the funniest and most heartbreaking I've heard in ages – either tumble out in torrents of half-remembered ideas and f-words, or are measured carefully in Slint-like cadences, half-spoken, half-sung. So all the words don't become too much, Thomas throws in juicy instrumental synth confections 'July' and 'Thesis (Lear)' to keep things spacious and radiant.

While offering up a few reference points helps me understand where this fits in my personal history of musical enthusiasm – 'When They Built The Schools' is Radiohead's 'There There' half-asleep on the couch; 'Cops Don't Care Pt. II' is a prime Tobin Sprout cut from a lost '90s Guided By Voices album; and 'Monster Movie' is Elliott Smith with a backbone – the baffling thing about this album is that the deeper I dig into what I love about it, the more elusive its appeal becomes. All I can do is put it on again, writhe around in its warm recesses and itch-scratching edges, and let Thomas's inspired outpourings work their dark magic.

[All Are Saved will be released on vinyl, cassette, CD and digital by Polyvinyl on 7th April.]