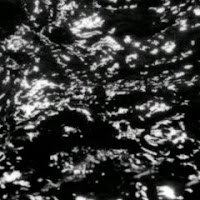 Grouper, Dream Loss (Yellowelectric)
I kicked off my afternoon working at the computer by listening to Dream Loss by Grouper, the companion album to the previous day's Alien Observer. I listened through my half-decent computer speakers, but at low volume so I wouldn't get too distracted. The titles of the albums are a pretty perfect summation of the feel of each: Alien Observer captures a sense of eerie wonder at watching UFOs in the night sky, while Dream Loss has a sad, muzzy, distant atmosphere that's a bit depressing. I mean, there's a song on there called 'Soul Eraser'. To have on in the background while working, the album passed me by. I think it needs headphones and a stiff drink to work its magic. Trentemoller, The Last Resort (Poker Flat Recordings)
A producer friend put me onto Trentemoller's album The Last Resort. Given it's one of his favourite albums, I wasn't surprised to find it stuffed with production trickery. For this reason, I find it hard to really engage with. The production tweaking seems to take precedence over the songwriting. However, as background music when you're working, it's perfect. There's some glitchiness in there, some murky funk, some dubby ooze, and plenty of crisp beatwork. I like it as long as I don't ask too much from it. You can also leave it on, pumping away, without having to worry about what to queue up next. It fills up an entire CD and any albums that do that are always far too long.

Etc.
I did skim through a bunch of other stuff today, but nothing I feel compelled to mention. So, a bit of a 'meh' day as far as music listening was concerned.
Posted by Tim Clarke at 20:52